Obviously someone without a hobby!

By Saturday night I resorted to staying up late to catch up with some applique.   Bagpuss had a hard time staying awake to keep me company.  Actually he thinks I'm making a new cover for the Pussy Pillow he's laying on.  He wants first dibs on it before his sister stakes her claim. 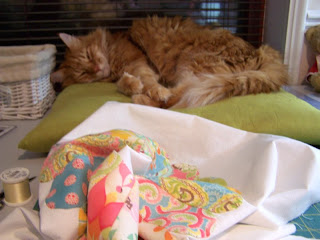 Moonlight stitching paid dividends.   I finished the applique on the Dresden plate. 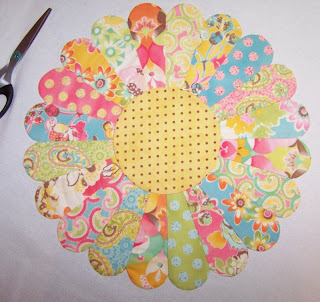 Now for the hard part...... deciding how to quilt it!     Maybe a grid in the centre.... with some beads... how about echo quilting... free motion!    Whoever invented the phrase "Quilt as Desired" is a sadist in my book! 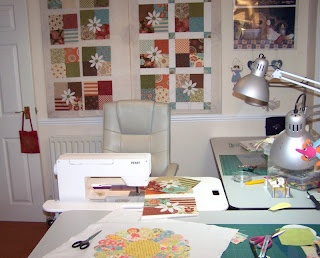 I enjoyed a little thereputic piecing.

How about my new design wall.    It's the invention of my other half  who finally got fed up of seeing my quilt in progress clinging haphazardly to a piece of wadding draped down the front of my bookcase.  I must say it has solved a critical problem.

I own a Hoover that blows as hard as it sucks and believe me it can suck the carpet off the floor.   It's like Hoovering in a hurricane!   One minute I was running it along the front of the bookcase the next I was frozen with terror as the infernal machine blew all my quilt blocks into the air and went after them like a ravenous beast.

It totally gobbled up one block and had it's eye on another when I finally snapped out of my stupor and unplugged it.   I had to unplug it because terror had robbed me of the ability to remember where the off switch is.    Only one block chewed beyond repair.... guess I was lucky. 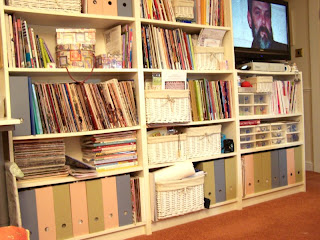 The applique looks stunning and I love the design wall it is perfect. Your craft room looks amazing in the photos. And anyway, what were you doing hoovering when there was stitching to be done? Hugs Tilly X

Hiya just popped over from Vignette to say hello. Hoovering what's that?!?!?! Love your Dresden, I have just done two cushion covers for a friend with Dresdens they are so effective. Good luck with your blog, I have only been blogging since October, it's very addictive!! Hugs Linda