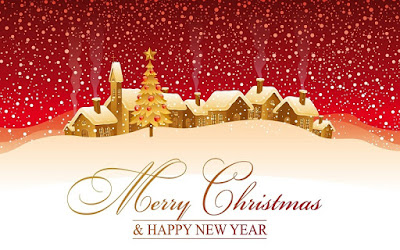 Hope you are all having a lovely day!

Was it good for you?

It was great for me.   I'm talking about FNwF's of course.

I had a surprise visitor.   My Mojo!   Don't know where it's been hiding for the last few weeks but was I glad to have it back.   Together again we had a really fun evening.    This is how it started.... 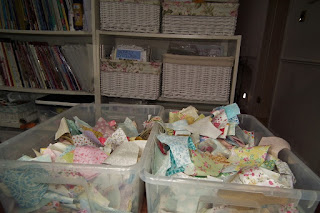 with boxes of inner and outer drunkards path block components or as I prefer to call them... pies and crusts.  This diet is really messing with my head.    I set up the tubs to the right of my sewing station on a rickety old collapsible  table I found in the Bat Cave.   Smart move.   Might not have  been so smart if the table had fallen to bits and spread my pie parts all over the sewing room floor.  Fortunately... my luck held.   Pretty soon I had a nice production line going.

Nothing could phase me on Friday evening.   I didn't even get flustered when my precious Pfanny Pfaff decided she wasn't too sure about the curve master foot after all.   She showed her displeasure time and again by chittering her spool, throwing out a couple of wonky stitches then tangling threads just to show who was in charge.    I was patient with her.   Did what had to be done to keep her comfortable and sewed on.

When TV time came around and I had to stop playing I counted up my blocks.   I was hoping I'd managed to sew about 30 quarter circle blocks.  Well imagine how chuffed I was to find I'd actually managed 63 !!!    I'm still happy dancing. 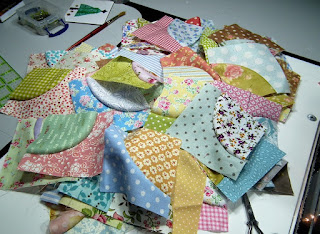 To celebrate I raised a glass of vino and toasted  Cheryll and all my FNwF's companions.   I was so excited I drank the whole bottle..... 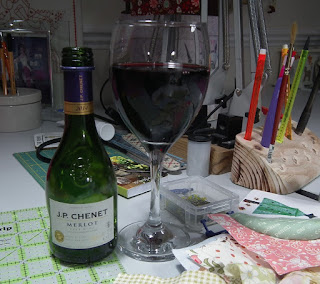 Yep..... this diet really is messing with my head!      It may not have been much but it was the perfect end to a lovely day.

Thank you Cheryll for a really lovely evening.   Hope you and all who joined in enjoyed themselves as much.    I'll be around to check.

Earlier... when I arrived home after the grocery run soaking wet and prepared to kill for a cup of tea and a sit in front of the wood stove I found this in the postbox...... 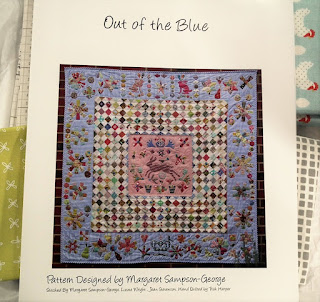 my face went from grumpy to happy in a split second.   Doesn't take much eh!

I'm going now because I want to spend this Sunday afternoon catching up with what you've all been up too.

The sun is shining and I intend to enjoy every little moment of brightness because it's going to be short lived.    We've been pummelled by Storm Desmond with his torrential rain and gale force winds for the last 24 hours.   Flooding everywhere.   Still... a few hours respite is not to be sniffed at when there is more rain and wind forecast for tomorrow.    Santa better get some scuba gear if he wants to visit here.

Have fun... cause a ruckus and don't forget to laugh in the face of adversity.  Folks will think you're mad but we know different.....

Feeling about as much use as a chocolate teapot!   Don't anyone ask me to run a booze up in a brewery either.... it ain't going to happen.   Coming from one who likes the odd (!) tipple.... that is sad indeed.

Don't know where my brain was last week.   The week that I packed and despatched SSCS gifts to my swap partner and forgot to post a photo of them.  DUH.   I was doing so well too.  Thoroughly enjoyed making the gifts.  Didn't panic once during the whole process (miracles do happen) and had them wrapped and ready to go right on time.    Well... here's the photo you all should have seen a week ago... 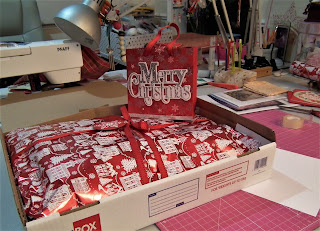 Not long now before this box will be arriving at someones door.     Hope they like the contents.

Now I'll need a second to put on my horsehair vest..... I have some serious penance to do.   I broke a swap rule!   It's been weeks since I posted and we swappers are meant to post regularly to enable our partners to get to know us and our likes etc.   I'm only hoping I've been gobby enough over the years for my partner not to have had too much trouble deciding what to make for me.     Humm... wondering who my partner is.... if it's you.... sorry!

Ok... time for an update on what I've been up to.  Sewing wise of course.   I'm plugging away at reducing and resorting my stash.  It's taking forever!     Got a nice pile of background squares cut and ready to receive baskets.  Got lots of baskets cut too.....


This is where the wheel fell off my speeding waggon.   Lots of baskets cut meant lots of baskets to prepare for applique.  As I'm working at the rate of a snail on sleeping pills right now this is a BIG problem.

I tried out a new (to me) method I found on Esther's blog.   Basically it's using Best Press with freezer paper templates.  Check out Esther's tutorial HERE.   It works a treat!   As the freezer paper is removed before appliqueing it's so nice and supple and super easy to stitch too.   I'm a convert!
Thanks Esther!

Have to admit I treated myself to a new mini iron.  One with a much shorter shank.  Don't know about you but I find the distance from handle to iron on my old Clover one a problem.  Attempting delicate pressing with it is somewhat akin to eating a fried egg with chopsticks as far as I'm concerned. 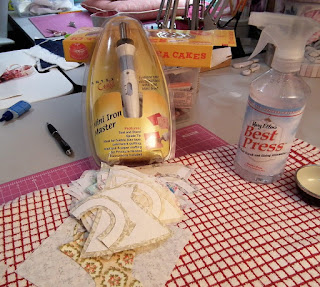 My new Mini Iron Master works a treat and was much cheaper too.  Win...Win...eh!

Now.... you might have noticed a new button on my sidebar.   A link to Quilty 365 a great idea from Audry at Quilty Folk.    I've signed up and I bet if you take a look you'll be keen to join in too.  Take a look HERE  (only if you are sure you can resist temptation).

I've been really keen to start my own circle project but as yet haven't been able to get going.   I will make a start soon.... like maybe Friday.  Well it is the last FNwF's of 2015 this week what better day to start a new project.  Fancy joining in a lovely night of self indulgent sewing/stitching?   Well click HERE and sign up.   If the thought of a whole evening of enjoyment  isn't enough just check out the lovely gift that Cheryll has put together..... who wouldn't like a chance to win it.

I may not have started  my 365 but Sally is totally smitten with hers..... 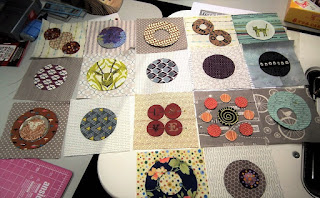 here's her first batch of circles.   I know... I've tried telling her she's only supposed to do one per day but she's a woman possessed.

She turned up with batch 2 on Monday.... 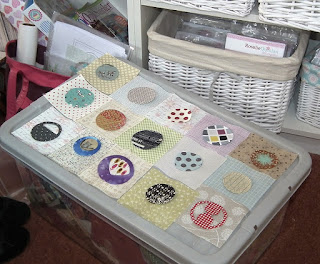 and she's still going strong.... except for the occasional coffee break to watch Chris knitting. 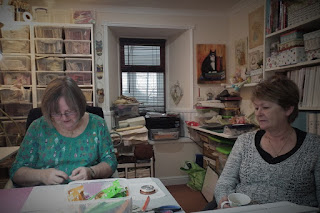 Heck... they do look serious.   Shows how tough it can be to get the foundation row of a baby cardigan just right.

I'm afraid I can't show you more of what I've been up too since I was last here.   My projects have either been secret or not very photogenic.   Been cutting lots more Drunkards Path components for my 'get rid of as much stash as I can as quickly as I can' project.   If ever a project was badly named it's that one..... quick it is not.    You see I'm not just dipping into stash for fabric I'm actually ironing and re folding and sorting every last piece of it.   I have a really cunning sub project going on though.    Every time I press a piece of fabric I slice off 4 pieces.   One goes into a new 'applique scrap' box for me and the other three go into large... pretty bags that (once I am done) are destined for the applique boxes of Chris... Sally and Kitty.   I'm quite chuffed with myself for coming up with that bright stash reducing idea.  Only hope they don't recipricate.   I need more fabric like I need a hole in the head.  I'm crossing my fingers.

It has been hard to find motivation here.  We've been having the worst spell of weather we've had in ages.   Every day is dank, dark, dreary and dismal... it's been that way for weeks.  I've forgotton what the Sun looks like.   It rains every day too.... occasionally not for the whole day.   Last week I spotted this little beauty on the burn...... 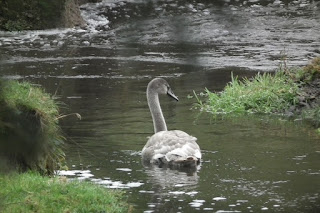 It might look a bit grubby right now but once it's adult feathers arrive it will be the most beautiful Swan.    It paddled up to the bend in the river then let the current carry it back to the start point time and time again.   I stood for ages totally captivated by it.  Hardly noticed that it was chucking it down and I was getting soaked to the skin. 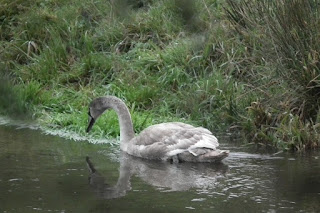 This is the exact same bit of the burn a couple of hours later...... 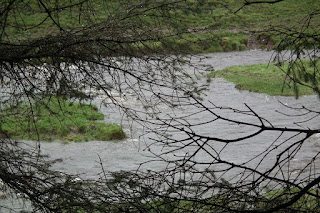 At this point it has burst it's banks.  Later... it flooded the field and the lower garden.

On the home front Mum gave us a bit of a scare.   She hasn't been eating lately and had an appointment at the Hospital for an endoscopy to try to find out why she felt she couldn't swallow.   I arrived at her building (sheltered accommodation) to take her for the appointment to find an ambulance outside and the warden and paramedics in mums flat.   The ambulance took mum to A & E and I followed.   Everything was OK.   Basically fasting for the endoscopy and not having taken her heart meds that morning (she got mixed up) had caused her blood pressure to lower to the point she passed out.   She recovered quickly and was super keen to keep her date with the Endoscopist (is that even a word).

With only a minute to go to her allotted appointment time I popped Mum into one of those hospital wheelchairs which you can only pull  and set off  on a mad dash across the hospital from A & E to Day Surgery.  Honestly.... I ran so fast that when we arrived I was relieved to find mum still in the chair.

It all ended well.   Mum had her tests and was diagnosed with a small Hiatus Hernia which doesn't require treatment. A discussion with her Dr later resulted in her being prescribed an SSRI which appears to be working a treat.   She's found her appetite again and is making up for lost eating time.

Do you ever have one of those days when you just don't know which way to turn? 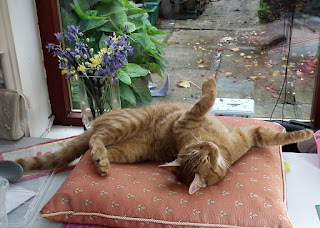 I think Tiggy was having one here.   Or perhaps she's trying out a new yoga position.

I need to be out of here and heading into the Bat Cave for TV time.   Here's hoping Mac has ran out recordings of disaster documentaries.  I've had all the Armageddon I can handle for one week.   Still... he's recording Dr. Jeff Rocky Mountain Vet these days.... thank goodness for a fluffy animal programme with a (mostly) happy ending.

See you all at the weekend

Have a great time till then and beyond.