One bright and sunny morning  with  laptop tuned into the Craftsy Class I began work on my Tinker Tote. 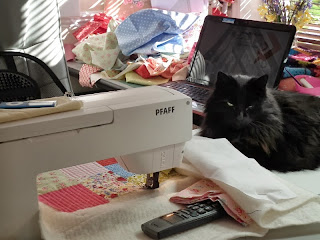 I don't normally need sewing supervision but Licky Lou obviously thought differently.   Have to say she took her self appointed role of Quality Controller very seriously...... 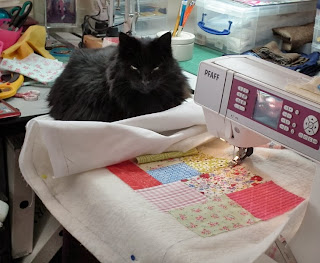 given half a chance she'd have had her nose under the needle.    Won't tell you how long it took me to choose fabric ( it's way too embarrassing) but eventually the first side was finished. 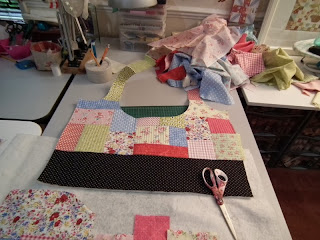 Quickly got the hang of the quilt as you go method of making the bag. 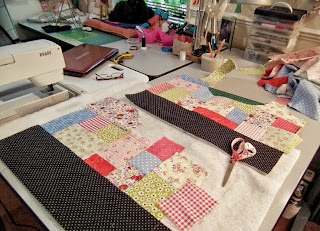 Second side is almost done now too.

Since I mentioned my mother..... 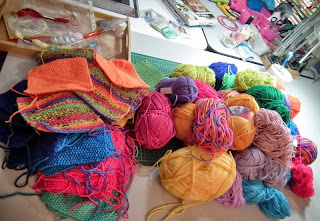 she and her woolly stash (this is the tip of the iceberg... you can't move for the stuff) are making yet another take over bid for my little sewing room. 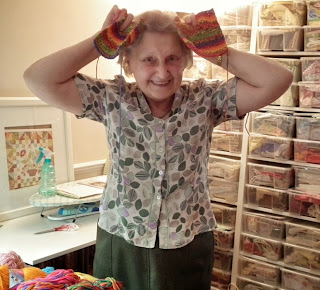 she flapped her knitted pseudo elephant ears at me.    When I tried to force the issue.... 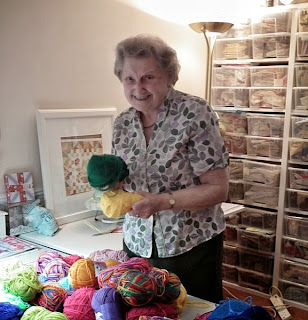 she threatened to yarn bomb me!!     I'd have defied her but I know she's too good a shot.    In case you're wondering she's back to knitting squares again.   Not for the Dog's Home this time.  This time her needles of fire are clicking furiously to help knit enough squares to  make a story blanket for the Minister at Chris's Church.   I have to keep reminding her they only want a blanket.... not a fitted carpet!

Now for my Stash Crisis.    After years of randomly squirrelling fabric in tubs and boxes in nooks and crannies everywhere I have a burning desire to get rid of it!!    Not all of it of  (heaven forbid).  But enough to substantially reduce the fabric mountain and maybe warrant buying a few of the trendy fabrics I love and don't have room for ;o)   I need to make scrap quilts and I need to make them NOW!!

Now (before you mention it) I know need to finish all the ones I've got that are in various stages of construction too.     We all have those... don't we?  Makes me feel so much better knowing I'm not alone ;o)

So... wish me luck and watch this space.

There hasn't been a good day to get to grips with the Flame Gun yet.   It's way too wet and 'steaming' weeds is not the object of the exercise.  It was decided that Maintenance Man would be the one to burn off the weeds.   However...   Mac obviously wanted to be the first to use it (it's a man thing)  so he sneaked out early one morning.   I almost had a fit when I looked out of the landing window and saw him shooting flames across the drive.  Puff the Magic Dragon had nothing on him!   Good job there were only a few cows about to witness me flapping about in my dressing gown trying to stop him from melting the soles of his trainers and spot welding himself to the gravel.   That strip is as far as he got before thinking better of it and beating a hasty retreat back to his workshop.  Thank goodness. 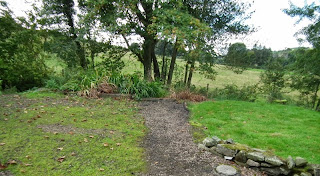 It's official.... I have M.E.... and here was me thinking I was morphing into a sloth!  Fortunately I  now have some medication to help with some of the symptoms.   Unfortunately my little brain is so worn out some days it just won't boot up.   Deletes words when I'm in the middle of a sentence...  makes me look like a real numpty (idiot) in conversation.   Makes it hard to string a written sentence together too hence the lack of blog posts and comments this past few weeks.   Heck... it's taken me so long to write this post my hair has grown an inch!

OK..... I'd better publish this post before my brain does something stupid like deletes it.   Believe me it has happened!

Hope you are all beavering away creating beautiful things to brighten your world but if you happen to be making a mess of everything you touch right now... join the club!! :o))

Wonderful post today Josie. Sorry to hear you have M.E. Hope all goes well for you. Can't wait to see what you do with your fabric stash. Hugs,xx

Your not alone with the 'random' issues, it isn't easy to do!
your mum is a cracker.
Boy you must have pretty drastic weeds over there that you need a flame thrower, next you will be napalming them? lol And they say Australia is a dangerous place with our snakes and spiders at least we can just pull our weeds out.
sad to hear about the diagnosis but at least you have a name for it and you aren't going potty.
Take it easy and have fun destashing!

with your positive and enthusiastic outlook on life I'd imagine you can conquer anything... whether it be using a flamethrower, using up your stash or coping with ME.....
life has a way of throwing curved balls at us... all the best and a big Hugz...

Again, I see your header pop up and I instantly smile :) Does mum crochet? you could rip your fabrics into strips and let mum crochet away! just an idea. Oh and guess what I signed up for .... all your fault and thank you :o) now to actually start making my bag :o) hugs to you xx

You are definitely not alone. I have so many thing going right now, it is way past embarassing.
Three of them (maybe 4) are scrap quilts.
Hope the medicine helps to make you more energetic, I'm pretty sure your positive attitude will help a lot. Maybe it is your turn to go set something on fire!!
Sew On!!
L,A-

I can't do random either, and quite frankly I don't believe anyone who says their beautiful quilt was made of randomly selected and placed fabrics. Not great news about your ME, but at least with a diagnosis you know what you're fighting....good luck. Sounds like a very bad weed situation, just as well you've called in the professionals. Take care, x

I just can not do the random thing. Great post again, hope the new meds help, with your positive outlook I'm sure you are unstoppable xx

It is always good to see your post pop up and I'm always keen to see what you are up to. Now I know it's been trips to Drs and blood tests and all that sort of thing. I guess it's reassuring to know you have 'something' and I am hoping you can get it under control and get some energy up - you are going to need it to deal with all that stash and the yarn bombings from your mum. Take care :-) xox

Sorry to hear you have ME but I guess it is better to know. Hope the meds help. I try to do random but it doesn't happen very often. The bag looks lovely. Your Mum looks like a fun lady. Hope we don't find you yarn bombed one day. Good luck with trying to destash, I try but don't seem to be able to part with anything. Hugs.......

Josie, you always make me laugh when I come here...that looks like a fun class to take...your mom looks to be having much fun! Have a great day.

Hi Josie !
I'm sorry to learn you had a bad news... I don't know what is ME but I hope you're feeling not too bad...
I can see you have still enough energy to be ready to get rid off of ...what ? FABRICS ???? are you serious this time ???
Your Mum is very busy too !! It must be a family thing !
Hugs and kisses !
Florence

Hi Josie, such a fun post as usual. Your mum looks amazing! Sorry to hear about the ME, I hope you are doing well and the medicine helps. Take care xx

Hehe, your Mum is a beaut!! And yes of course, getting rid of some fabric justifies buying new stuff....
Bummer about the ME, though I guess it is a relief to know what you're dealing with. Do take care of yourself and leave the heavy work(and flamethrowing) to the hired help... will give you more time to make those scrappy quilts too!

Josie, my gosh, while I am sad to read of your ME diagnosis, I am glad that at least you have a name for what's going on, and can treat some symptoms accordingly.
As for the Stash, good luck with thinning it down - perhaps you could consider selling those pieces that you no longer love as much as you once did? Then you could use the $$ to get the quilts quilted, don't buy more stuff!!
Hope Mac doesn't burn down the house with his flames... x