All white on the night!

Well..... I might not have made it to the Quilt Show yesterday but the day was not a total loss.   I had a lovely relaxing FNSI instead.

Isn't it funny how when you have a good rummage around looking for something different to do all sorts of goodies you'd put to the back of your mind catch your eye again.   Like this..... 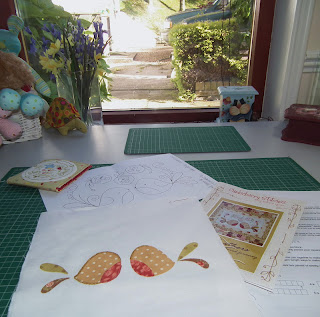 Tailfeathers..... one of my all time favourite BOM's.     I had great fun prepping the little applique Robins.  For once Steam-a-Seam didn't get the better of me and I got all the pieces fused with no trouble at all.  Well... if you don't count that I fused the body of the bird on red fabric instead of tan first time... hey ho!
Got some of the blanket stitching done on the birds too.

Now for all the white stuff!

The roll of Sticky Fabri Solvy I ordered arrived yesterday so how could I not play with it last night.... 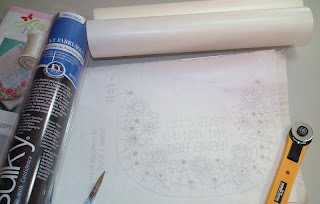 The photo above shows the Solvy after I ran it through the photocopier to transfer the design.   It was a bit fiddly to do but that was more because I bought it in a roll rather than flat sheets.   The roll worked out cheaper (call me mean) inch for inch than the packets of sheets.

Using my brain (!) I cut a piece of Solvy from the roll and stapled it at the corners to a sheet of craft card... kept it nice and flat and it fed through my aged printer/copier no trouble at all. After that I trimmed the sheet down to the actual design area and peeled off the backing paper I stuck it in place.  Apologies for the brightness of the above photo.  I tried and failed to make it any clearer.   The design is in fact really well defined and PERFECT!   None of my shaky handed tracing ... it's just as the designer (in this case Leanne Beasley) intended.

I did apply Parlan to the fabric before I placed the Solvy.  Wasn't too sure how the adhesive on the Solvy would react to the heat of pressing on the Parlan.   I'd imagine I could have had a real sticky mess on my hands and lots of tears before bedtime.  Better safe than sorry eh! 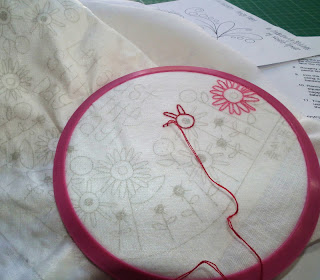 Here it is in the hoop.   Have to say the design is really clear and easy to see and I felt it helped me to stitch a bit more accurately.     The fabric is a bit stiffer than usual and in the hoop I found it easier to stab the backstitch rather than working the stitch in and out in one movement.  Not much flexibility in the fabric.

I haven't worked with Parlan much... it's a bit bulkier than the Weaveline I usually use so maybe I just need a bit of time to get used to it.   I'll try the Solvy with Weavline soon and let you know how that works. 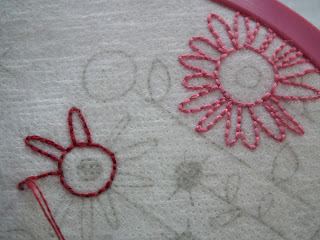 Here's a close up so you can see the texture of the Solvy.  Can't wait to see the end result once it's been dissolved away.

OK.... I didn't stitch a whole lot last night but I did enjoy playing with fabric.   It didn't help that I couldn't stay awake for a late night stitch in.   Didn't get much sleep Thursday night so I was comatose by 10pm.

Here's someone else who is having trouble getting out of bed recently..... 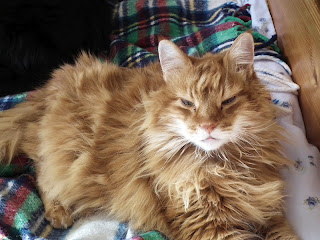 poor little Bagpuss has been to the Dr.   What do you do with a constipated cat?   Give it an enema according to the vet.   Fortunately Baggy has recovered from the embarrassment and is feeling quite comfy again.  He's much happier since I assured him no one can see his bald patch.... as long as he keeps his tail down!    What next.......

I'm off to blog hop now.   Hope everyone who joined in FNSI had a really great night.   Oooop's... just realised I forgot to drink my wine!  Next time.....

Have fun and I'll see ya soon
Hugs
Josie

I love the embroidery pattern. I just went to a quilt workshop in Thessaloniki Greece, where we learned all different kinds of applique. Interesting!

I just purchased some of both the Solvy and the Parlan. I'm dying to try it but worried it will be hard to work with. I'm thinking I might just try a smaller project first. :)

Thanks for letting us know about the solvy Josie. I must give that a try. Poor puss. Glad he is comfy again. Hugs,

thanks for the info on the Solvy, looks like a great product. I use the parlan and love the feel of it, I used to use pellon but I prefer the thinner parlan, the weave one is too thin for me. Good to play around with the different products though. Poor bagpuss, the indignity of it all!

I love, love your tips about the Solvy. I have never used it and have a project that I need to transfer the design to Osnaburg. I think your method is what I need to do. So sorry about your sweet kitty!

I really enjoyed reading your mini tutorial about the Solvy. It's always difficult to copy patterns neatly so this would make it a lot easier. Thanks for popping by and commenting on my blog. Hugs

Thank you for sharing, might just have to go out and give it a go muyself. Tail feathers s going to be stunning. hugs

Thankyou Josie for your explanation of the solvy product, it looks great and your project is traced perfectly. Such a save not having to do all that tracing. Your stitching is beautiful by the way. Enjoy.

That Solvy looks fantastic - wherever did you get it?? The worst bit for me with stitchery is when I get an attack of the wobbles when I'm tracing the designs - please can you let me know where you got it from - thanks in advance!!!

I've never heard of solvy so will have to investigate and see where I can buy it here in Oz.Love how your stitchery is looking,I just love Leanne Beasley's work.Hope puss is feeling more comfortable now he's not all blocked up :) Barb.

sounds like a great fnsi even if it wasnt a late night. i haven't tried products like solvy but i like the idea of just feeding it through a printer and all the tracing is done lol. i used to use parlon but much prefer the whisperweft (gauze stuff you iron on lol) as when the item is finished it is all a uniform height rather than the pellon standing just that little bit taller. poor pussy too. have you tried oily sardines as a regular treat to keep things moving. off to see all the other wonderful things on you blog as i havent been on for a visit for ages

That reminds me that I have that project hidden away somewhere. I think I got to block 4. Hmm do I dig it our or should I just let it be? Maybe best to just leave it. Hope the cat is recovering.

Hi Josie I finally made it to your blog after FNSI, and what a gorgeous blog too! You had a very 'thinking' FNSI, experimenting & working with the Solvy and stuff... your pics reminded me that I have this pattern too, must put it on the To Do List... hope the cat is ok... x

Love your cute little tail feathers. The solvy sounds interesting, that would be a big help for all the Vignette tracing!! Poor Bagpuss, I hope he is much better now.

Thanks for the info on Solvy. Looks like you had a very productive FNSI. Hope your puss is feeling better.....

Love that embroidery pattern. The tailfeathers blocks are adorable. Glad you got to have a nice relaxing FNSI!

Love the little birdies - this is going to be sweet. And you seem to be a pro with Solvy! 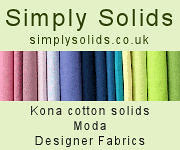