Every sewing room should have one..... 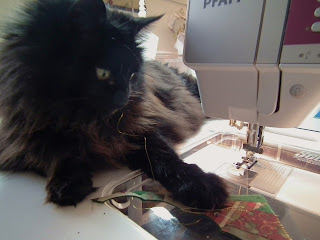 I hadn't a clue that Licky Lou was a budding seamstress till I walked in here and caught her in the act.  I gave her the whole Health and Safety lecture about the dangers of needles and other sharp objects but she obviously thought I was full of hot air and not worth listening to. 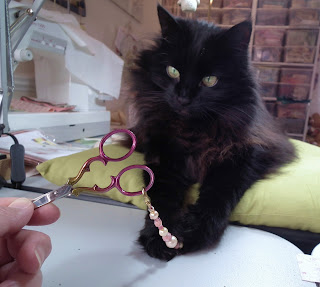 we had a little dispute over ownership of some scissors!   No way was she going to hand them over without a fight.     She did relax once she saw fabric and realised that her paws weren't quite up to operating the scissors to cut it herself.

That's when she got to thinking she'd just keep them anyway and wear them as a bracelet.... 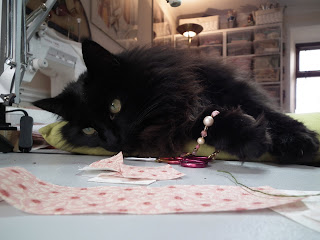 She did relent once I met her ransom demands and the requisite number of cat treats were paid.  After that we got down to some serious sewing. 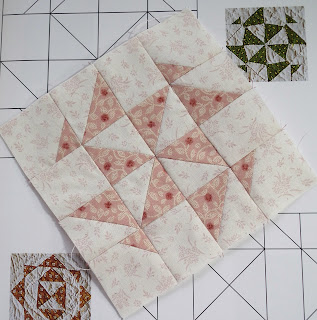 Row A... Block 1 of my our Dear Jane quilt.    We're pretty pleased with how it turned out.

I have been busy sewing other stuff too.... secret stuff which I can't show you yet.  Done bits and pieces of stitching too which I'll show you later.... when I've ironed it!  Ooop's don't shoot me I should have said 'pressed'!!

I'd better get back to my stitchery..... before Bagpuss decides that's his forte!!

So pleased you were finally able to get to work! Your Dear Jane block is lovely - a great combined effort you two.

Looks to me as if your helper is pretty good! I dont mind what you do with your iron...just dont do it to youself!! Diane xx

So sweet helper there <3 I have two helper too,they just love sewing and knitting....Have a nice day!

Love your little helper. My rescue kitty hasn't developed a love of fabric yet ;0)
Love your block, a Dear Jane quilt is on my list of things to do one day.

Your first block is beautiful. The fabrics are so soft and pretty. One down......
What beautiful green eyes Likcky Lou has. Such a great helper too!

It is a bit scary when you look at the amount of "stuff" in your stash ...its fun though...and sometimes it is nice to be reminded of just what IS in there! lol

My sewing room helper, Jasper, is expert at keeping my chair warm, flicking bobbins and such off the sewing table, opening drawers and cupboards (but never closing them)and flinging scraps out of my basket. Fortunately he hasn't sought to take over the sewing itself - though maybe if he did more would get done?

I got my husband to read your post and we had a good laugh! Why do cats love to sit in the way? Your block is lovely.

I love your kitty... we had one just like her, but a nasty snake got him.. Wish we could keep ours inside, but they do love to get out..
Aren't they the best company...

Cute,Cute Cat:o)Being allergic,no cat around here:-(
Lovely Dear Jane,always wanted to start! Have put my name down for a workshop in January.So may be the small verson for me.

Your friend/helper is just to cute!