I finished month 1 of the Natures Journey SAL on time!

In fact.... I finished and posted to SAL with two whole days to spare!  I still haven't stopped grinning and happy dancing.  No chance of me experiencing the wrath of Chookyblue......yet!! 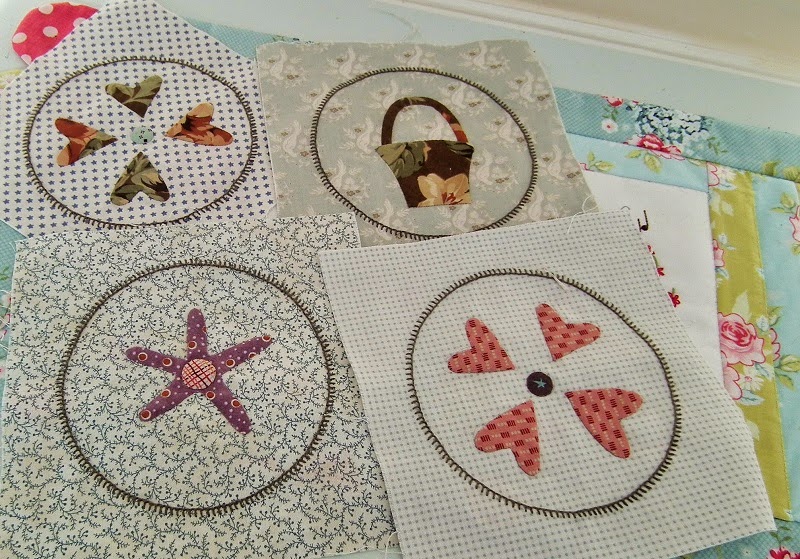 and here are all the small ones.... 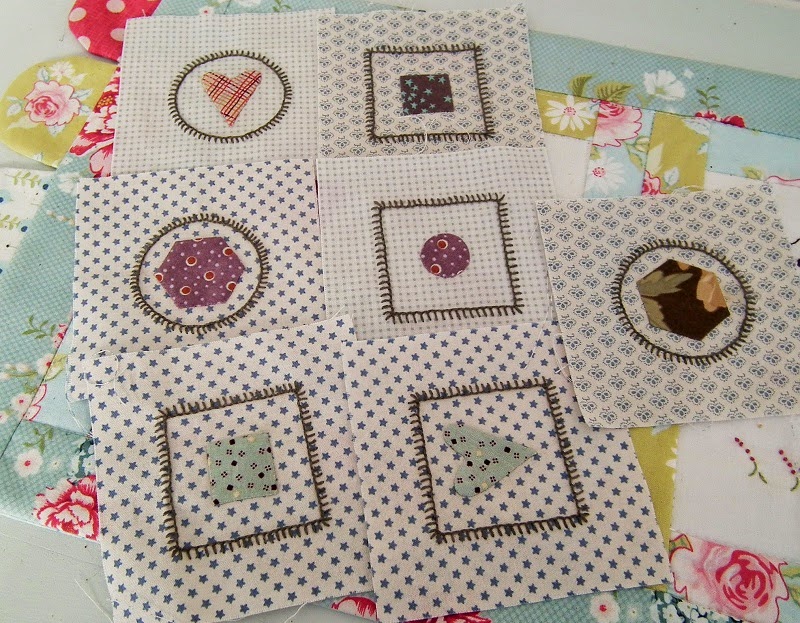 I decided not to date the quilt so I made a second square applique block instead.   What a rebel eh!

If you happened to read my post over at SAL you'll know I was so flushed with success and giddy with delight that I announced I was thinking of making a second Natures Journey using fabrics from my stash.   When will I learn to keep my big mouth shut!   Chookyblue is nipping at my heels wanting to know when I'm going to start #2.

Shhhh.... don't tell her but I've decided that one is really enough.  There's too much stuff around here needing my attention for me to go for the double..... maybe one day.

Made a bit of progress on Stonefields this week too..... 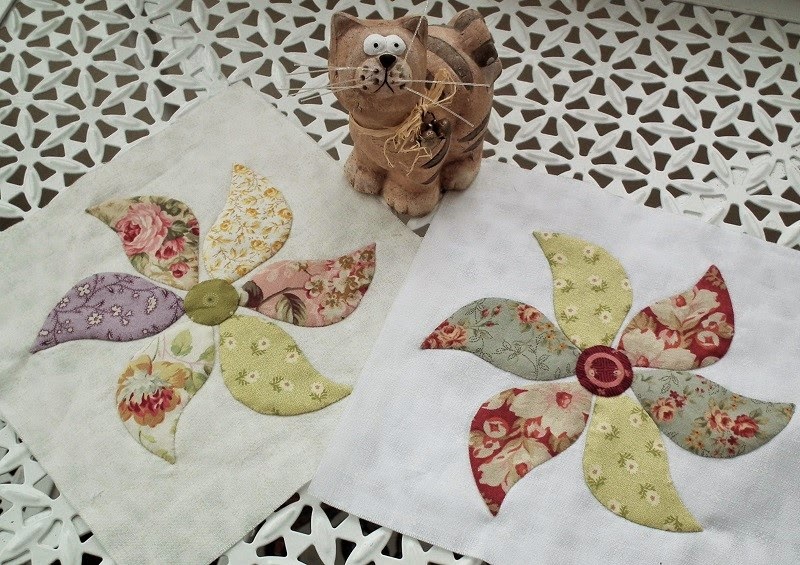 I really love these blocks.   Much better than my first attempt.  Hope to do more this week.

Stealing the odd minute to work on this ..... 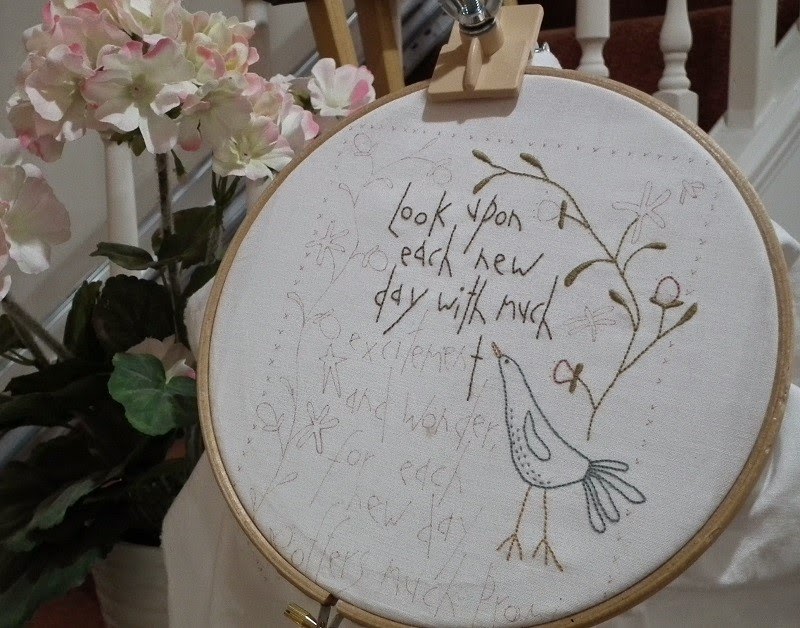 A little progress is better than not at all.   Love that bird!

On the home front...... Mac is much better after his fall.   His bruises have reached the 'yellow' stage (definitely not his colour) so they should disappear soon.    A couple of nights ago... during TV time in the bat cave....   one of his front teeth just dropped out!  The one that's been protruding since the fall.    Mac simply picked up the tooth... examined it then put it on the table.... without a word spoken.    Is that super cool or seriously weird?   I'd have been having a dicky fit if that had happened to me.

Humph.... I'd just gotten used to living with Bugs Bunny too!

Better go and throw some logs on the stove.... did I tell you I have logs... lots of logs!   Just as well... I don't want to risk little Mimi getting chilly.... 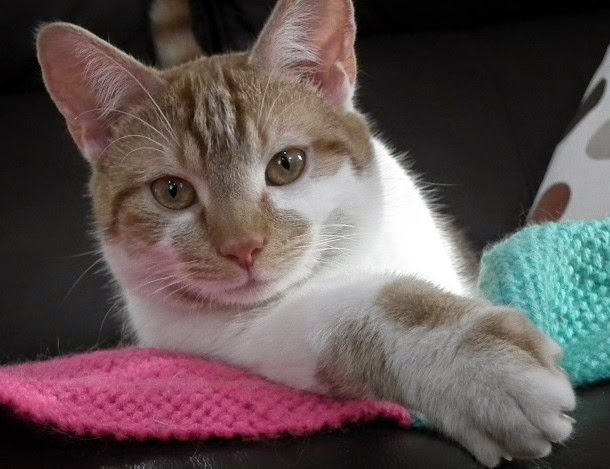 I'm off....
Hope you all have a really productive week.... whatever you are doing.   Just don't do anything stupid like tell folks you are going to make 2 of something......;o)

Love your blocks Josie. Both for Natures Journey & Stonefields. Glad Mac is getting better. Bit of of worry about that tooth. :) Hello Mimi you beautiful kittie. Hugs,xx

glad to see reality hit you in the head and you decided to stick with one NJ quilt.......although you could have made the second one for me........

What lovely colours for both your quilts. A cute cat ornament with your `Stonefields` blocks. Nice your real fluffy friend can be part of your stitching. Happy Stitching.

Awe, your pussy cat is so sweet. I could just reach out and hug her. Love your blocks, so many! I especially like the backgrounds you have chosen. The stitchery is coming along nicely too. Keep up the good work girl!

I love your Stonefields blocks - they are really beautiful. Glad to read that Mac is on the mend (missing tooth and all).

Well done - of course we knew you could do it! I always believed that once you say something in blogland it is there forever - but you've just proved me wrong - whew!! Mimi is gorgeous - looks very content. Oh yes, love your blocks, by the way!!

well done Josie!!
you are on a winner here, keep it up.
love the stonefields blocks too.
little mimi looks gorgeous.
happy sewing.

Great jobs on the sal blocks. Everyone seems to be keeping up really well. Good to hear that Mac is on the mend.....lets go with super cool. Mimi looks like a sweetie.

Your blocks look fabulous!!
I love the Stonefields,..

Beautiful blocks! I don't think I could make two of these at a time though! Good luck on the second one as well. What will your color pallet for the second one be?

Congratulations on the SAL progress! I have thought of doing a second Sweet William quilt in Civil War fabrics, but I doubt I will so please don't tell anyone! Did your Mom knit Mimi a blanket?

Your sewing is looking beautiful Josie,

Well done! I am so impressed at you getting the blocks done in February, and posting about them -also in February! You are a legend :)
Impressive coming back to reality and sticking with just the one so quickly ;) Saying it may have been silly, sticking to it and doing two cos you said it, well... Glad Mac is doing better- cool/weird? don't know, when one of my teeth starting wobbling I was freaking out so who am I to judge ;) You have logs? Really? lol

Love your blocks...good to hear reality cam to you and you have decided not to do two......sometimes a rush of blood to the head and excited dancing can do that!! Good to hear Mac is improving although the tooth falling out a bit scary!! Not planning to eat apples??? Love your kitty cat!!

Yipee Josie! Great start, now just get that second one on the go, huh??!!! Better you than me, LOL x

Oops, I didn't read it properly...
so now I will just call you a Big Chicken for not doing it!

Great blocks Josie !! One is funny to do, two…why not IF you have only that to make !!! But you have to take care of a poor man it seems….takes a lot of time !!
Hugs
Florence

Beautiful blocks Josie, you are getting to be an expert with needle turn!! One of those quilts looks like plenty of work! Good to hear Mac is doing better, hope you have a lovely weekend. xx

Phew! So glad you don't have to face the wrath of Chooky!! Well done on finishing with time to spare.