I missed all the sew - ins last month so I was really keen to make the most of Friday night.     Had to take mum to an appointment on Friday afternoon so I packed a little bag..... 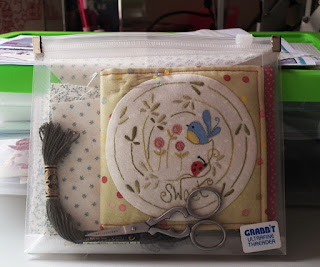 Most of you girls get to stitch at football matches or swimming pools or at the athletic track.  Me... I get to sit in the car outside the Chiropodist.    For once mum timed her appointment well.... Gardeners Question Time was on the radio.    Stitching along with Bob Flowerdew (that's his real name) is as good as it gets!

I did stitch Friday evening too.   Took advantage of a dry spell to take my stitching out into the garden.   Wasn't out there long before couple of  neighbours  popped over for a chat.... 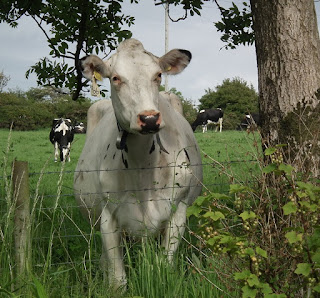 Blanche (I made that up) seemed very interested but I don't know if it was my stitching or Tiggy doing her yoga routine that fascinated her.... 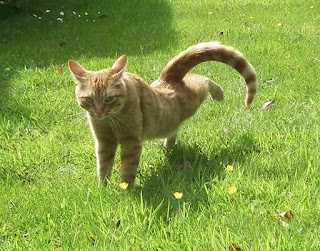 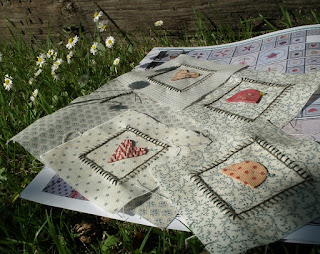 The June blocks for Natures Journey SAL are finally under way.   I haven't had much time for sewing/stitching since I got back from the cottage so it was lovely to spend some quality time with one of my most favorite projects again.

Thanks for hosting FNSI again Wendy....  you made my day!   Love your new website by the way!!

Well... TV time with Mac is almost upon me again so I'd better grab a bite to eat before I head into the Bat Cave with my stitching.

Roll on tomorrow... I'm taking time off from garden/building duties to spend a whole day blog visiting..... see you soon then  :o)

Time really does fly doesn't it.    I swear I blinked and missed most of May and half of June.  I have been super busy but when I look back it's hard to see what kept me so busy that I couldn't find time to spend in blogland.

I did have a mini break at the beginning of June.   The girls (Chris, Sally and Kitty) and I travelled to our favourite cottage for a week of hyper sewing or just plain hanging out depending on the mood of the day.

Day one and here's my little workstation all set up and ready for action..... 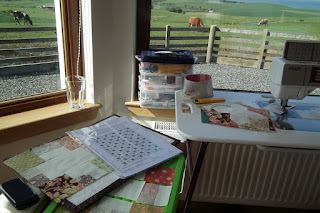 Three days of snail sewing later I had this....... 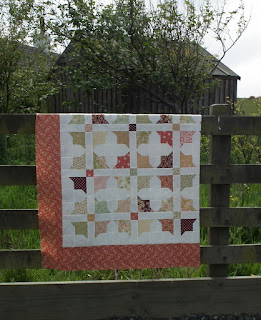 A finished quilt top!!    It's ages since I had one of those.  No one can accuse me of being prolific!     The pattern is Sweet Pea from The Pattern Basket.... it's a really nice one to piece.  No hassle... which is exactly what I needed.

Chris occupies the work space to my right (we are creatures of habit).   Day one and she continued working on a gorgeous Dresden quilt she's been busy with. 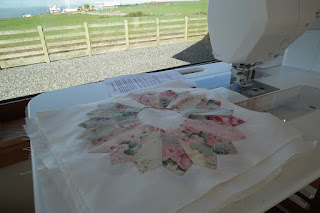 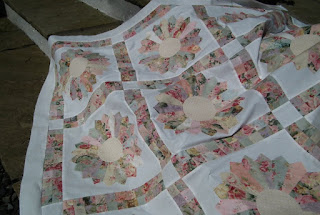 impressive eh!    Chris is gifting this quilt and I reckon the recipient is going to be thrilled to bits with it.    Problem is.... her DH loves the quilt too so guess who's going to make another one.

To the right of Chris is Sally's space.   Day one she was getting down to the serious business of making her first wall quilt.... 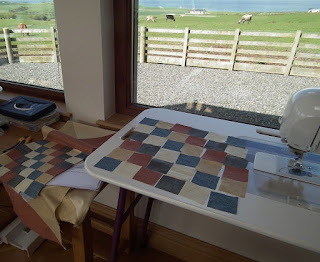 some piecing and some beautiful applique later here it is..... 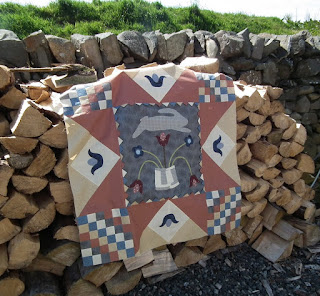 Don't you just love it.   The pattern is  Prairie Spring from Cornbread and Beans Quilting.  I have a vested interest in this project... Sal borrowed my pattern.   Does that make me part owner?   Maybe she'll let me put it on my wall for half of the year.   Maybe I just better make my own.

To the left of me is Kitty's space.   Day one and she's starting the week with a four patch set on point with sashing and cobblestones.   Believe me there were a lot of patches to be stitched for this one.   Fortunately Kitty is the machine sewing equivalent of Michael Schumacher ...... she is fast! 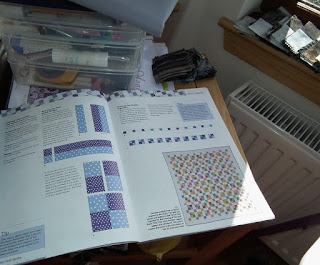 Didn't take her long to finish her first project.... 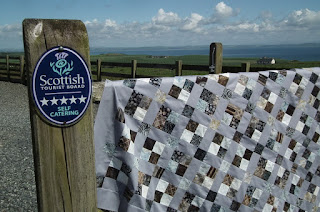 Reckon the 5 stars on the gate refer to her quilt as well as the cottage!

Flushed with success we all worked on a second project.   This is how mine arrived at the cottage nicely organised and packed ready to sew. 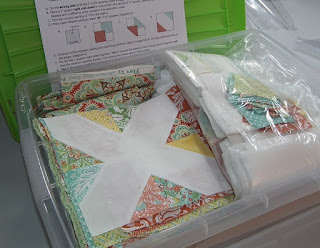 This is how it looked just as we began packing for home...... 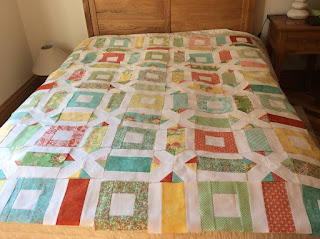 It isn't finished.    The girls helped me lay out the blocks till we were all happy with the arrangement then stack them in rows ready to stitch.   Well.... hold onto your hats.... this is how that top looks today...... 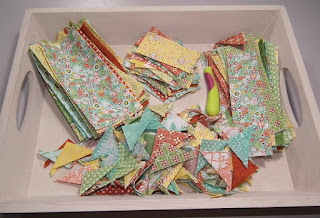 I unpicked it!   Brave or plain stupid eh?    I just didn't like it.   I love the fabric (Flora by Lauren and Jessie Jung)  I love the pattern too.   I've just fallen out of love with the combination.   Not to worry.... Flora will find a home in a new quilt.... a scrap quilt... and I'll have the pleasure of sewing it all over again.   Being a process person does have it's advantages.

That's it for the quilty stuff.     I can't show photos of the girls second projects because in the rush to pack at the end of the week I forgot to take some.... duh!

Actually it's not quite the end of the quilty news.   I'm still sewing away on Natures Journey.  My May blocks are all done and dusted ..... 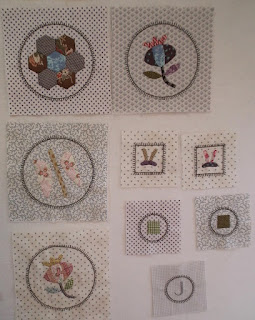 and I'm about to make a start on June.    I'm still loving this one but have to admit that wasn't what I was saying when I was making those strange flowers.

Things have been very busy on the home front.   Any sniff of fine weather has us outside trying to catch up with all the chores outdoors.   Take a look at the courtyard.... 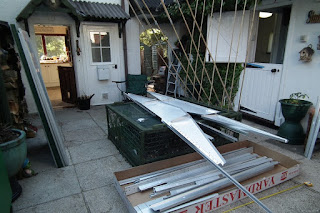 Looks like Mac is building an aeroplane out there doesn't it.   It's actually a fancy new metal shed to replace two old, battered wooden ones.    I thought it would be a good idea to dismantle them (Mac wants to keep the wood panels) in situ but he had other ideas.   He wanted to try out his new  ratchet winch.  He roped a shed to the winch and the winch to a convenient tree and began the move.  Problem!   He'd used his old climbing rope which is stretchy.   I stood waiting for the huge "twang" that would hurl the shed into orbit along with Mac still hanging on to his winch.

Three days later..... the sheds have moved 3 feet and boy have they suffered in the process.  Believe me they weren't this dilapidated before Mac had his bright idea! 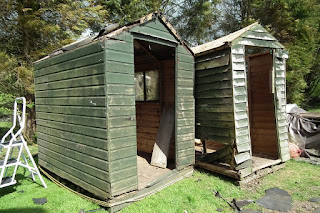 Right now I'm working on the foundation for the new shed base.   Got my Bob the Builder hat on again.   Love must be  in the air..... Mac bought me a mini cement mixer!   It's banana yellow and very girly.   Who's a lucky duck then.

These poor plants are not so lucky.   I'm still working on clearing and laying bark and membrane on the long flower bed.   The previous sunny spell we had was short lived.  The rain returned and work on the border came to a halt right after I'd bought these plants.   They are all dressed up with nowhere to go at the moment.    I'd better get a wiggle on with the shed base and get back to the flower bed before they croak! 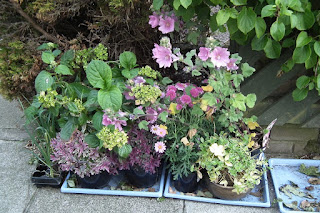 One of the reasons I've not been around for so long is that I attempted  to stop taking the Anti Mac and Anti Mum pills.... with the Dr's permission of course.   Turned out to be a big mistake.   Seems I need to be drugged up to cope with them both.

I was just about holding my own till the day my mum took delivery of an Electric Wheelchair. Great... now we can go for walks.  Well..... we made it to the supermarket on a wing and a prayer.  I had cause to remember that when my mum drove a car she was a speed queen!     Problems started when we left a home store in the town.   First off I had to persuade her it was not a good idea to power the chair up the middle of the car park access road.   I finally won the argument and guided her to a long pedestrian ramp up to the pavement.  Success.

At the top of the ramp a group of people were standing talking alongside a very large (4 foot tall) rubbish bin.   I reached the top first and turned back to see mum powering up the ramp towards them at full tilt.   They managed to jump out of the way just as mum careered into the waste bin!  She wasn't hurt.... the bin was empty.   To say those folks were gobsmacked was an understatement.     Mum simply smiled and told them it was her first time out with the chair.   By the look on their faces they thought it should be her last too

Apologies complete we carried on towards home.    Without warning mum took off like a bat out of hell.   I chased after her yelling....  "Take your hand off that knob"!    She took not a bit of notice.   An elderly couple walking  towards us stopped and watched in horror as mum found more speed. Her wild ride came to a sudden stop when she steered into some poor guys garden fence.  It was a miracle she wasn't thrown over it into his flower bed.   As I was running to see if mum was alright the old guy yelled at me.... YOU WANT TO GET THAT WOMANS LEGS COVERED UP!!!    OMG.... what had he seen!

Mum was totally fine.... totally unrepentant and chastised me for fussing.

I'm back on the pills.

That's about it from me for now.    Hopefully I'll be around much more from here on in.  I'm looking forward to catching up with all your antics.

Hope you are all enjoying the season Summer or Winter
See you soon.....