My first FNWF and what did I make?

It figures that if you start trying to sew in a disaster zone nothing good is going to come of it.  True to form.... it didn't!

My plan for FNWF was to start making new liners for all the baskets I have in here.   This is as far as I got.... 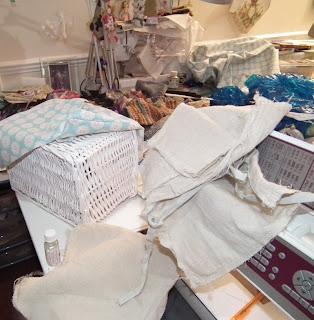 First off..... I took measurements from the old liner.   Checked out how it was put together and decided to just copy the construction.    Smart move.   Saves me from having to think for myself therefore avoiding potential headaches.

Cut three rectangles.  One for the bottom and two to be joined into a tube to make the sides.   Joined the two side seams  then made fitting darts 6" away from the seams from the bottom to about 4" up the sides.  Clever girl.... so far so good.   Then I decided try the sides for fit before I stitched them to the bottom.

That's when the trouble started.    Sure it fitted around the top when I turned it out over the rim but the inside looked more like a pair of baggy bloomers than a nice smart lining.   Grrrrr......  I was not happy!  Something was wrong.... very wrong. 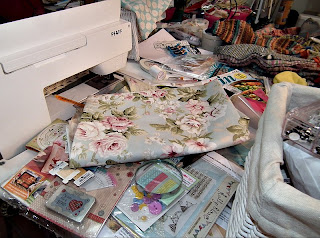 I didn't have any space to cut or sew.  There's no room to swing a cat in here at the moment.   Fortunately Licky Lou and Bagpuss were in hiding so I wasn't tempted to try that anyway.

Second wrong thing.......   I made an assumption!   When will I learn never to do that.   I assumed the sides were made of rectangles.... wrong!!      Because my brain couldn't cope with any more measuring and calculating I decided to unpick all the seams in the original liner so's I could compare them to mine.   Imagine my horror when I discovered the sides are cut on an angle.   Smaller at the bottom than the top.... to allow for turning over the rim while not allowing too much bagginess in the basket!     The first photo shows all the 'bits' draped over the sewing machine.

Honestly..... I was in such a paddy with my wee self by then I decided to abandon the whole basket lining business and find something else to do.    Like what......  grafting sock toes perhaps? 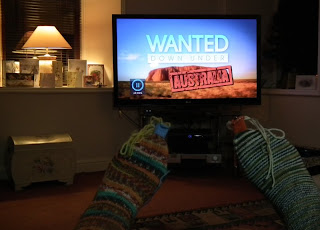 I did take the sock mountain into the lounge (halfheartedly) then spotted what was on TV.  Back to back episodes of   "Wanted Down Under - Australia".   Perfect!   I might not be able to sew with friends but I could be with some of them in spirit if nothing else.     I visited Perth.... Darwin .....  Brisbane.....Auckland
the programme covers New Zealand too.     Enjoyed a bit of a grand tour all from the comfort of my own recliner.

Sadly.... it became clear that no way would I ever be 'Wanted' in Australia. It would appear I'm way too long in the tooth!   That and I'd never pass the aptitude test.   I did have some once.......

Well..... at least the whole day wasn't a dead loss.    I got to grips with another 'resolution' and got a long overdue hair cut! 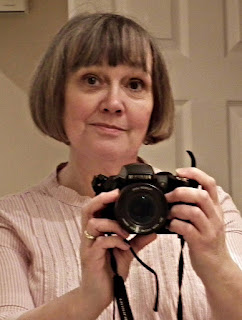 Thought I'd show it off before it reverts to looking like I'm wearing a dead ferret on my head.    I took that photo myself... clever eh!    I know I look like I'm posing with the camera but I'm actually snapping a shot in the bathroom mirror.    I might just change my profile photo..... get my moneys worth out the the hair cut!

Well.... that's it for now.     I promise I'll do better next Friday Night With Friends.

Hope you all had fun.   I'm going to be visiting everyone to check.

That hose kind of days happen to us all......but why do we keep going when we know it's not going to work?? Great new do.

Love the new do. Better luck next time. hugs

The fact that you were sewing with us IS the point. It really doesn't matter WHAT you achieve... just enjoy it with friends!
Good luck with the ling.. sounds like its under control now :)

how disappointing about your new liners, I would have just kept the old ones and found something fun to make.
glad you weren't swinging those cats.
your new haircut looks lovely. Very clever self portrait. Do we get to see the 'dead ferret' look?

love your haircut ,the style suits you and lol,at everything else,i find you very amusing my friend,have a good day.xx

Great haircut and now you know the shape of the basket liners you want to make!

Basket liners can be tricky little critters.........never mind, at least you got to do a bit of armchair globe trotting.

Gorgeous haircut!!! I think there is a lesson in here somewhere about messiness not necessarily leading to creativity (I thought the 2 went hand in hand lol) although I appreciate the fact that in order to get the clutter put away you needed to make the liners for your baskets - cant win sometimes can we?! However, glad you had the chance to learn a little more about 'downunder' (including NZ). Better luck sewing next time!!

Love your haircut :) So frustrating when projects give us fits!

Oh Josie, are you familiar with the Aussie saying "S**t Happens"...?!
At least you have a swish new hair-do! x

Great new "do". My sewing room prevents me from working too. As soon as I clear a space the slide starts to fill it from other mountains nearby!

There's the coveted socks again & their cute chimneys. Mark Friday night down as having done the planning & got the pattern for your liners so now you will be off & speed sewing. I love the new haircut, no ferrets harmed in the making of it I hope & no cats harmed while testing out whether room to swing them or not too. I've certainly had nights like that, all that is missing are the socks! Tracee xx

Hey Josie we all have had days like that. Your haircut looks nice...

Too bad about the sewing but the new hair do is cute! You are looking really slim and gorgeous!

Yes - I've had days like that too! Hope you get those basket liners done - I'm sure the next one to make will turn out perfect!

You're all set for the next time you feel like tackling the basket liners. Great photo of your lovely new haircut.

Too bad about the liners but at least you'll have the template ready for when you attempt making them again.Nice hair do mine is very similar except for the fringe. Glad the cats weren't near you when you were having your hissy fit,then the fur really would have flown lol :) Barb.

I think you deserve a pat on the back for attempting to make new basket liners! I would have just gone to the store to purchase plastic bins. At least you know what to do when you decide to tackle the project again! Cute hair cut!

I love watching Wanted Down Under and sadly I am too old to be wanted. Perhaps if they were recruiting quilters then we might be in with a chance.

Haircut looks great. Those basket liners look like a pain to sew - hope you manage to get them done. Not that you have much choice now that you've taken the others apart! It's good to know it's not just me that does things like this!

Your haircut looks great.
Sigh....we all have days like that, lol. You'll be ready for the next time you tackle those liners.

I guess a lot of us take those short cuts of not unpicking and measuring properly only to have things go pearshaped. Great hairdo, and great pic showing it off.

Congratulations on the new haircut. Sorry to hear about the liners. Hopefully try 2 will work out better. Thank you for "following" me.