Can you spot the difference!

First resolution of the year is almost in the bag.  You'd better take a good look because something tells me it won't look this tidy for long. 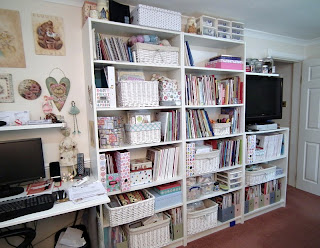 Still have some work to do in here.  I've plans to repaint all the magazine files (they're wood) on the bottom shelves.  Bought a tin of Laura Ashley Pale Duck Egg Blue paint now all I have to do is get painting.

Believe it or not I am making some progress on the basket liners..... 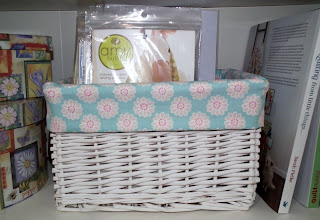 2 down only 10 more to go!   I promise I haven't been slacking.  There are  7 more liners all cut out and ready to sew.... hopefully tomorrow.  Heck... forgot my Mum is coming tomorrow...better hide the socks! 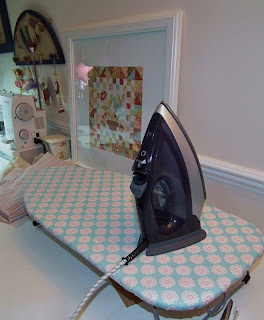 Another first.... making a new ironing board cover.   The original one was so bad I've been hiding it under tea towels for months.  Didn't want you to think I was a slut!   I'm well chuffed with the new one.

I'll tell you what I've spent most of my spare time doing this week..... following a moving mess around the house!!  The excess mess (the stuff I didn't want in the sewing room) I piled into the spare bedroom.  Great... a tidy craft room.  Guest room like a bomb site.    You might remember that the spare room is where the dastardly quilting frame lives.  Getting to grips with that is one of last years resolutions that fell by the wayside.

Guess what.... it's on this years resolution list (you can't say I give up easily).    So to get to the quilt frame I  cleared out the mess in the spare room and piled it into my bedroom!  Can you see a pattern forming?  Spent a day moving furniture and wrestling the quilt frame to achieve this...... 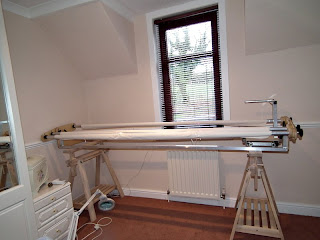 A frame in a place where I can actually get to it in order to use it (gulp).   Had to squash the 'Guest Bedroom'  part up a bit though..... 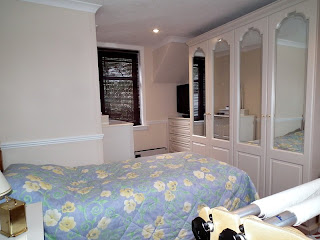 But... everything fits.  Looks a lot better than it did the way it was before but you'll never know that because I forgot to take a before photo.

Now I have a huge mess in my bedroom.   Not only did the mess from the craft room/spare bedroom get dumped in there so did the Christmas trees and decorations while I sorted out space for them in the loft.   Bet you know what's coming next.    Yep... spent today in the loft.   I wish I was a Hobbit!!  At least I would have been able to stand up straight up there instead staggering about like Quasimodo's twin sister!  I hit my head on the rafters so many times it's a wonder I didn't suffer brain damage.... or did I?

To think.... all I wanted to do was tidy the craft room!!

I'm making headway on another resolution too..... 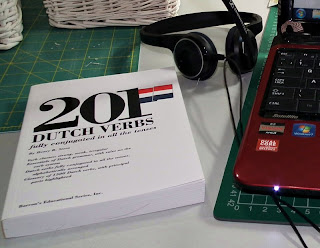 I'm learning to speak Dutch!    Makes a change from the Double Dutch I normally spout.  I signed up online with babble.com and I'm having great fun.   Actually.... I'm hoping that exercising my brain might just stop a million or two brain cells from biting the dust before their time. 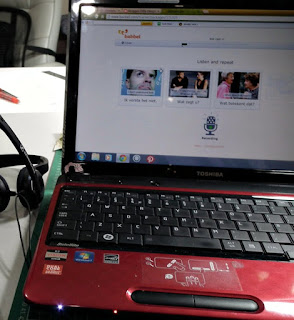 Mac thinks I'm mad (talk about the pot calling the kettle)!   At least I get to talk Dutch to my laptop... and it listens!!   Honestly... I'm just glad it can't laugh.

That's all for now.   I need a little TV fix to settle me down before I head up to my bed.  If I can't find it in the mess I might just sleep on the sofa.

Have fun everyone...... see ya soon
Hugs
Josie

Wow, can you come and sort out my mess when you're finished......please!

Looking great in the craft room and the spare room.

Keep up the good work!

Hi Josie, you made some great progress in your studio. Your basket liners are really looking nice.

Josie, your blog just cracks me up, it is so well written. From what I can see, you have a lovely home and your craft room leaves me a little envious.
Cath @ Bits 'n Bobs

wow your craft room looks gorgeous. with the mess you weren't just reshuffling the deckchairs on the titanic?
At least some of the stuff will get to go for a drive, but where?
enjoy your tidy room, it looks very inspiring.

You are too funny. My messes end up like that most times and just move from place to place. Your craft space looks really nice!

Your craft room looks fantastic, I love all your shelves. It would seem that it's an international phenomenon to have a clean up at this time of year. My mess has been migrating around the house too, and lots in the car to donate. Great ironing board cover too.........goed gedaan (it's a test!)

You have been busy Josie. I am still working on my sewing room but at least I can see the cutting table now. Your space is looking great. Hugs....

Well I think all this shifting,re-arranging and domino effect is well worth it when I look at your sewing room it's certainly spuring me on to get into mine and strat to seriously de-clutter and take a few things on a road trip as well.
Love how your room looks now and good luck with the quilting :) Barb.

wow Josie your room looks fantastic,and i think it is great you learning another language,now hubby will need to take you to Holland for a holiday to see how good you learnt.xx

Wow, your room looks amazing, everything is so organised. Don't be afraid of your quilting frame, once you get started you'll wonder how you ever did without it. Start with a small quilt so you don't get so nervous.

Josie my friend, I will think of you on my Monday morning, as I finally get myself started on a proper re-organisation of my Sewing Space... I am inspired by you!
I know that thing of moving mess from one spot to another, but I have only two spots to move mess to, neither of them is a good idea...
Well Done!! It all looks great x

Ha! Have you been peeping in my house? I cleaned my kitchen the other day and the mess of odds and ends that accumulated on the worktops are now on the dining table. The dead stuff for the tip I put by the front door and dear husband has removed them to the living room?!! I don't know why. The only tidy room is the spare room. Maybe I shall move in there. Well done to you for making some headway at least and two baskets done. Yay!

The baskets and ironing board cover look fab. The rooms look gorgeous. Did you sign up for dutch lessons before or after you banged your head in the loft? LOL!Do you think Mac will make anymore sense if you try to translate him from Dutch cos he speaks a whole other language - don't think they have a book for that! Have you planned a break to Holland that you haven't told me about? Speak to you soon. XX

Your sewing room is looking great! And you're not the only one with the cleaning bug :) I've been doing a lot of straightening and cleaning since the beginning of the year as well. I always get hit with the organizing bug in January.

What a beautiful sewing room! It is gorgeous. Does your frame take a sewing machine or is it for handquilting? I have one to use with a domestic machine and it takes up so much space in my sewing room. I speak a bit of Dutch - we lived in Eindhoven for a year when we were first married.

Love your room Josie. Your basket linings and ironing board cover are beautiful. What made you decide to learn Dutch??

Goodness, I got tired just reading about everything you have been up to!!! Your sewing room looks terrific, and I love your basket liners and matching ironing board cover. Giggled about using the back seat of your car for stuff! Sounds familiar to me!

Fantastic progress on your sewing room. It is so bright and tidy. I did my sewing room a couple of weeks ago but you wouldnt believe it now. Your basket covers look great, and your magazine files will look great when painted. (hint: got to paint them now you have told us).

OMG! Someone that cleans like I do! I feel so good when I have a clean room until I look in the room where I dumped all the overflow. Guest room is a great place to hide the evidence...until someone comes to stay! Haven't used the car as storage yet...great idea!