It does look better with the borders are on....... 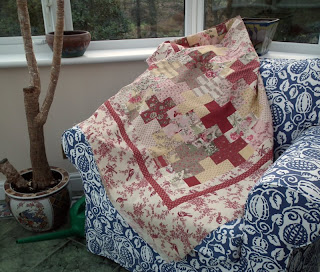 I never would have thought I'd have to eat my derogatory words but Spam Fritters are on the menu tonight for sure. 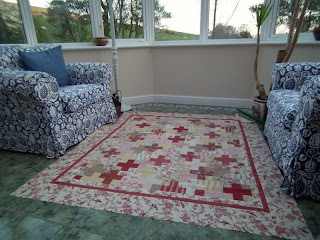 I fancied an outdoor photo shoot (cool eh) to show off my latest finish but as it's been raining cats and dogs out there most of the year and I didn't fancy scraping mud and sheep doddles off my new flimsy (even if it was a freebie)  I opted for some conservatory pics instead.   It's a good job I did manage to get the decorating done in there before going on retreat...eh! 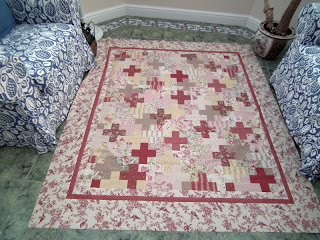 Took this aerial shot by balancing on the back of the sofa..... apologies if it's a bit blurry.  I was having trouble with my centre of gravity.... turns out it's lower than I thought!

There's someone else taking over working in my little room right now......... 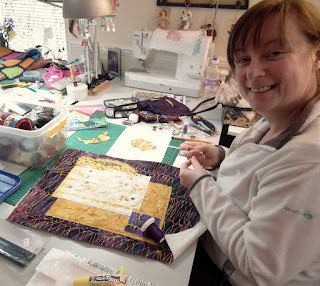 Tilly is here having a little 'creative' break.    It's true what they say... creative people are messy!   We've had everything but the kitchen sink dragged out in in search of  "inspiration".   Personally I'm hoping she's inspired to run the vacuum around  before she leaves! 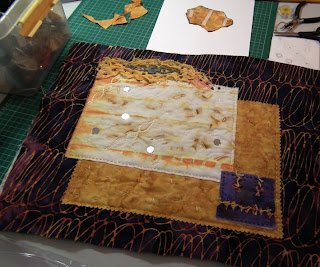 It's looking good so far.   Actually it's looking even better now that it's finished.... I'll show you the end product next time.

Me..... I'm working on another WIP that's been hanging around a bit too long... 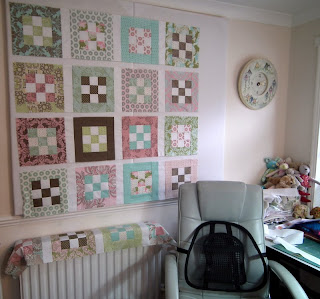 I made a great start with this one a while back.   Managed to make all of the blocks before something else bright and shiny caught my eye.    Been busy adding  sashing and joining rows.  All is not well though.... I have a problem.    I haven't enough white fabric to finish!   The white I used came from stash and now I don't know where I bought it from or who the manufacturer is.   Before you say it..... I've cut off the selvedges.    If ever you needed proof I'm an idiot........ 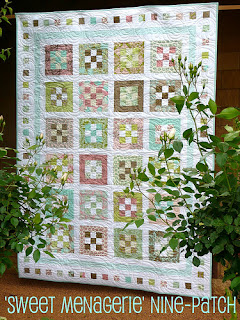 you can download it here if you love it as much as I do.

Back to my dilemma.    I have enough fabric for the centre sashing and first white border.  Enough white to complete the chequerboard border to which would  leave me two white borders short.   Rats!

First option...I could buy another white fabric and use that to piece everything from the blue border outwards. Hopefully the blue dividing strip would hide any shade difference.

Second option...... I could try to  re design the border.  With luck I could maybe squeeze two chequerboard rows out of the white I have and use those to replace the three border rows in the pattern.

Third option...... shoot myself now and save myself some angst!

So.... I'm not going to finish this quilt top this weekend as planned   Grrrrrrrrrrr!    Still.... I have other quilts in the WIP pile that I can work on so the rest of the  weekend won't be wasted.

On the home front Licky Lou and Bagpuss have both joined Mac on the sick list.   The vet treated them with an injection of long acting antibiotics (the cats that is....... much as I'd like to I can't get Mac to the vets).
The injection had a rather unfortunate effect on their little tummies.   I've been on Poo Patrol for so long now I'm beginning to see my yellow rubber household  gloves as a fashion accessory along with my new Eau de Disinfectant perfume.  Lovely eh!   Wish you were here?   Guess not!

Well.... that's all folks!    Nothing much else is happening here so I'll get out of here and leave you to enjoy the rest of your weekend.

Don't forget to have fun... it's compulsory
See ya soon
Hugs
Josie

Oh Josie I hope Licky Lou & Bagpuss get better soon, yellow if very hard to wear. Mac too but sounds like he is not such a messy patient. YOur conservatory is wonderful as is your quilt, just perfection. I do the same, cutting & then wondering what fabric I am using. I would go with option 1, a different white from the blue border out. I'm sure you will have a great result which ever solution works for you, the blocks are very pretty. Tracee xx

Love the finished flimsy - nice that you were wrong and others were right. LOL

Please, please don't shoot yourself - can you imagine the mess you'd make. Not the mention you might get the mess on those beautiful blocks.

Once again, Josie, you crack me up. LOL

I love your writing! And.. the quilt of course. I just had to put on my green gloves!! I have a very greedy cat, especially when he sees other cats he just gulps down his food, and....throws it up 5 minutes later!
Me too, I would go for option 1. I'm sure you'll find the right way to finish the quilt with the lovely coloured blocks.

Your spam quilt turned out great! The borders really pulls everything together.

Love the new flimsy and the laughs, you crack me up.

The top is just gorgeous. Love the border fabric. Enjoy your spam fritters. :) Hope everyone gets better soon. Hugs,xx.

Hi Josie. Both quilts are so lovely. Love the border you've added to the pink quilt. I'd go with option 1 as well. I'm having a similar issue. I made a pile of Sylvia's Bridal Sampler blocks, then thought to my clever self that I have so much of the white background fabric left I'll use that for my Churn Dash blocks. Of course there's not enough white left for sashing strips for Sylvia or Churn Dash. I've bought three lots of the same white Moda fabric and when I lay them beside the original fabric they are all slightly different. Still thinking about what to do but biting the bullet and just choosing one is probably what I'll go with. Hope you have a lovely day and everyone gets better soon.

Hi Josie, I love your quilt, it looks so pretty with a border. I also love your 9 patch quilt. If I were you I would just use a different white for your outer border, try and match it as best as you can. I'm sure only you will know its not the same fabric. Happy sewing with your friend.

I'm afraid you bamboozled me with all those options for your quilt, but I have confidence that it will look fantastic whichever you chose. (not helpful am I?)
your top looks gorgeous with the borders-well done.
shame everyone couldn't be sick while you were on retreat?
Enjoy making your choice...
x

Love the finished top with the borders but I liked it before so that was a given. Loving the other quilt also, but not sure I would be any good at helping with your worrisome problem. I love the look of the quilt from the original pattern so I think I would probably go with the first option and just use a different fabric from the blue border out. I think our first thoughts are usually our best bet. Praying everyone gets well soon in you piece of heaven.

Borders can really change the look of a quilt, and this one looks great. As for the white, a traditionalist might say use what you have, but I would go with option one. Have fun!

Josie, I really love the quilt on the floor there. Which one you ask - well, all looking better than the other! My fav is the one with the perfect matching new border :))

Your conservatory quilt is spot on!! Love it!! I wonder what decision you came to with the white fabric..? I am hoping it was not Option 3!!! Hope the cats (and Mac) are getting better and you have been relieved of poo-duties. I loved your previous pics of your countryside :-)

Hi Josie ! your quilt is wonderful with its border !!
For the second one I'll put another white after the blue border.... but I should see it in real to give a better advice! ;)
Florence