Well.... the wheel came off my wagon this weekend!  I'd intended to sew up a storm but that was before I fell foul of my old nemesis..... procrastination!!!

So... without further ado here's a photo of the quilt I made for my friend and neighbour last Christmas.... 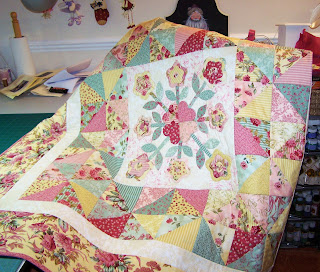 ﻿This quilt was the first handmade gift I've ever given and I fussed and worried through the whole making process.    Don't get me wrong.... I really did enjoy working on it and my friends reaction to her pressie made every stitch worthwhile.
It was my first ever attempt at needleturn applique (before I'd even heard of starch & freezer paper) and the first time making yoyo's too... talk about a learning curve..... 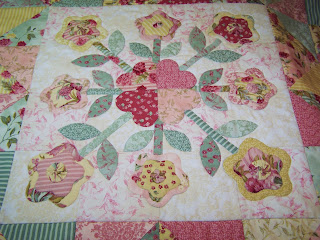 This applique has a story to tell too.   Just after I prepared the block for stitching Mac had a workshop accident with a chop saw and severed part of a finger.    He was admitted to hospital and had to undergo two surgeries in three days.   First one to try to stitch his digit back on.  Second one to cut it off again when it was decided the first op hadn't been a success.

Now... because of Mac's offical status of 'Hermit' and the shock to his system of being removed from his comfort zone I was allowed to stay with him at the hospital the whole time.   Well... from 8am till 10pm each day.    I got to sit and stitch lots of leaves and flowers during that time.

I wouldn't say it's a fantastic memory because Mac was really poorly the whole time.  It was a huge ordeal for him and a big relief  for both of us when he was finally allowed home after 4 days.

There was another 'first' on this quilt too.  The first time I tried stitch in the ditch anywhere other than a straight seam.    With a bit of help from Tilly.... cheering on the other end of the phone.... I ditch quilted around the applique and yoyo's (which I stitched down... still not sure if that's what you're supposed to do with them). 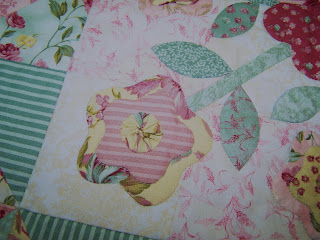 While I was procrastinating over the weekend my mum took over one of the tables in here..... 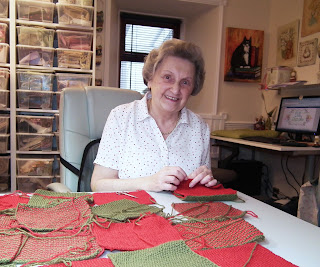 She likes to come over when she has knitted blanket squares to stitch together.  She reckons at 83 she's getting too old to creep about on the carpet laying them out.

Mum is a obsessive compulsive charity knitter!!    Honestly... she'll sit up till the wee small hours of the morning to meet her self imposed deadlines.   Last week we delivered 21 sets of cardigans and hats she knitted for the premature baby unit.  She'd no sooner got home than she produced 6 scarves for her sheltered accomodation charity coffee morning.    Now she's working on half a dozen more blankets for the local canine rescue centre.   Red and green... for Christmas!

My mum dosen't know the meaning of the word  PROCRASTINATE.  I have a sneaky feeling I'm adopted!!

I'm sworn to secrecy about the cause of my swithering.  It's my SSCS gift... shhhh  say no more!   I'm not the worlds best decision maker at the best of times and when it comes to deciding what someone else might like.... I could dither for Scotland!!    Still... I'm making good progress.  So don't worry swap partner you will have your gift.  If all else fails I'll ask my mum to knit you something!!

Better get back to decision making....

Hope you're all having fun!

I don't like crawling around on the floor either. I used to have a pingpong table that I used a lot for arranging quilt blocks.

Your applique quilt is beautiful and the story makes it all that much better. It turned out so beautiful and I'm sure your friend really enjoys it.

Wow that's a stunner of a quilt - you did a beautiful job of it- I'm pleased your friend was suitably impressed. (and what memories stitched into it too, ouch). Kudos to your mum for all her charity knitting - that's a fabulous pile of Christmas squares.

What a lovely quilt and your first attempt at needleturn was much better than mine. Mine was so bad I never finished the project. I saved it though. Maybe I'll post it someday on my blog to give everyone a good laugh. (LOL) Your mother sounds wonderful, how blessed you are! Don't blame her for not wanting to crawl around on the floor, a good excuse to come visit you. :-)

Miss Josie, that quilt is absolutely stunning... I think we could have a procrastinator club!! It would be filled to overflowing!!!
Poor Mac... what a horrible thing to happen to him...
Ps. your mum is incredible... I want to be like her when I grow up!!

Perhaps your Mum could adopt me too? But only if she passes on her vim and vigour! Mine seems somewhat lacking lately - which is no good this 'close' to Christmas when you have made a handmade pledge....

Your not the only procrastinator out there. It seems to be my middle name sometimes. And like your mom, my mom doesn't know the definition of procrastination either. I got it from my dad. Beautiful job on the quilt!

love your mum Josie how could you not.ox

O, that quilt is stunning and beautiful, what a spectacular gift you made for your friend!
Sorry for the circumstances that prompted those long hours of stitching, though.
My mom is 84, she no longer is crafty or sews, but when I was a girl she made we four daugthers clothing and tons of doll clothes. I am fortunate to still have my mom and my dad both and cherish them so much.

Beautiful gift for your friend! wish I were her LOL, I think your mum deserves a table, wow! shes a busy lady, have a good week.

Your quilt is beautiful, amazing applique and I love the pretty colours. What a story attached to the quilt, poor Mac. Your mum is amazing!

I Just love that quilt, very pretty, with wonderful piecing, Philippa would be proud!!! How are you doing?